Get to Know us

Cyntech’s success and trusted service is only possible through the dedication of our entire team.
While Ashley and Willem have been the face of Cyntech for many years, it is the great lengths to which every member of the Cyntech team goes that ensures our company runs as efficiently as it does. 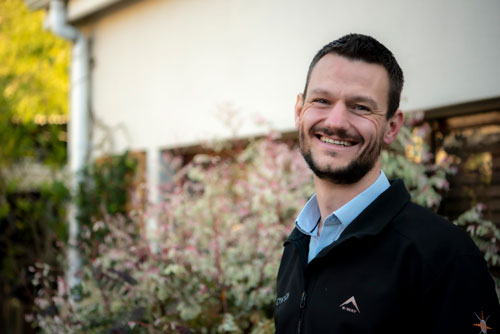 Ashley Verhulp is experienced, motivated and adaptable. He sees his many years of experience as Project Manager and Design Engineer for the petrochemical, building and urban development industries as more than a job – it’s a passion.

Ashley’s specialities are numerous, such as leading project teams and coordinating activities between developers, the design team and contractors. His skills also include designing holistic process control and instrumentation systems, LV reticulation, CCTV design and lighting systems. He is registered with ECSA as both a Professional Engineering Technician (Pr Techni Eng) and Professional Engineering Technologist (Pr Tech Eng) and is a member of the South African Institute of Electrical Engineers (MSAIEE).

Ashley intends to share his passion with others – he’s registered with ECSA as a Mentor in the field of electrical engineering and strongly believes in developing younger engineers and transferring skills. 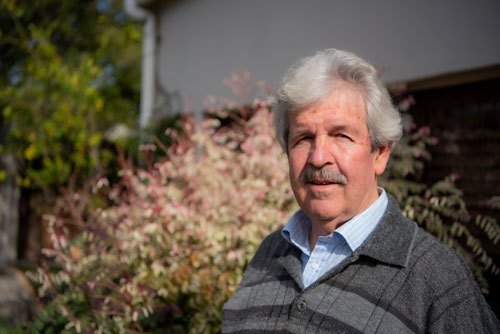 Willem began his career as a Design Technician in 1974 in electrical and electronic services. This instilled a love for the profession, leading him to study a Bachelor of Engineering (Electrical and Electronic) at the University of Stellenbosch.

Willem is registered with ECSA as a Professional Engineer. He has a wide range of experience, from engineering for petrochemical plants both onshore and offshore to industrial installations, electrical reticulation services, electrical and mechanical building services, commercial installations, automation, controls and drives as well as hazardous location classification and systems engineering.

In addition, Willem undertakes forensic investigations for static flash fires at fuel offloading installations as well as fatal accidental electrocutions. He is also the convenor of the working group to rewrite SABS 10089 Part 2.

In 2001 he began mentoring Ashley Verhulp, Cyntech’s Chairman, and their relationship grew from strength to strength, culminating in the creation of Cyntech. Willem’s many years of experience in the industry makes him invaluable to the team. 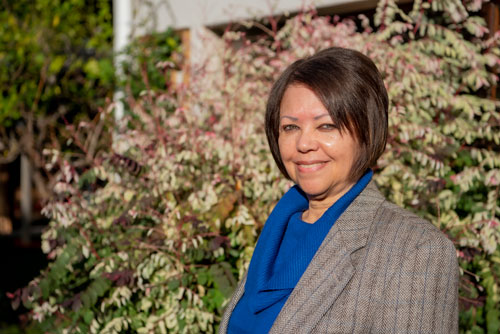 Theresa has extensive experience in administration and financial management. She began her career at Standard Bank as a teller, ledger operator and data capturer. She was then promoted to Sales Consultant where she consistently reached her targets. What’s more, she performed staff training in various business processes.

Theresa then moved into financial management at De Villiers & Khan, where she was tasked with invoicing, debtor and creditor control, fee proposals, VAT and PAYE reconciliation.

Due to Theresa and Willem’s favourable working relationship, Theresa joined the Cyntech team as Director, where she will be responsible for the financial management of the firm. 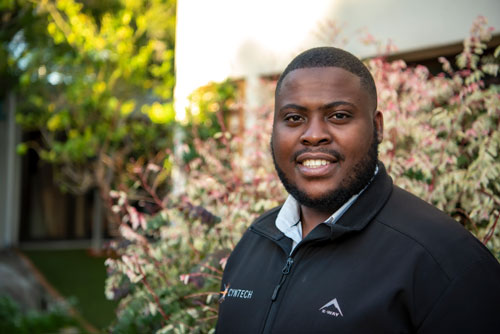 Sikho began his career as an Electrical Technician/Electrical Draughtsman with guidance from Chairman Ashley Verhulp, which has led to a symbiotic working relationship.

He has experience in draughting electrical and mechanical drawings and has assisted in the design of firefighting automation systems and hazardous classifications on fuel depots, as well as electrical and instrumentation design of fuel receipt and loading facilities.

Sikho has been promoted to Associate and Senior Project Manager, and also coordinates, mentors , and leads other staff members while facilitating collaboration with all stakeholders to achieve best project results. He is honest, loyal, customer-centric, and key to the Cyntech team.  He has such a bright growth path ahead of him, leading towards senior management, following the guidance of Ashley's coaching. 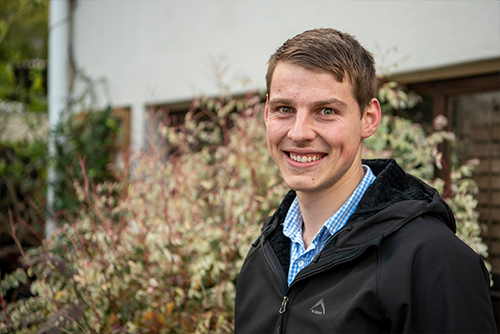 Albert began his career with Cyntech in January 2020 after completing his BEng in Electrical & Electronic Engineering at Stellenbosch University in 2019. Albert has a passion for renewable energy systems. And for his final year project, he designed and manufactured a prototype Electrically Exited Synchronous Generator to be used for further research on its application in wind turbines.

Albert is continuously looking to upskill himself and is always willing to assist to the best of his ability.

Albert is in the process of registering with ECSA as a Candidate Engineer and will then be mentored by Cyntech Chairmen Ashley Verhulp and Willem de Villiers to attain his PrEng. 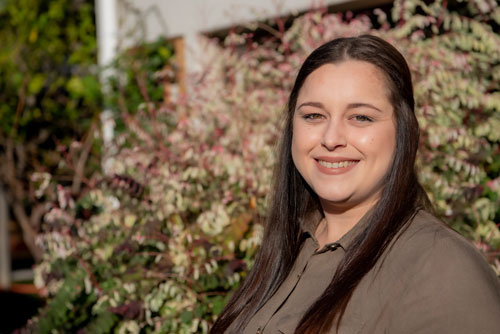 Farryn began her career with Cyntech in March 2020 after completing her BEng in Electrical & Electronic Engineering at Stellenbosch University in 2019. Her final year project focused on the design and implementation of a 600W pure sine wave inverter which can be used to provide customers with a battery back-up solution when the utility is unavailable.

Farryn has a passion for the engineering design and development environment. She is always looking to broaden and develop her skills in all aspects of engineering and has a willingness to assist and partner wherever she can.

Farryn is registered with ECSA as a Candidate Engineer. She is currently being mentored by Cyntech Chairman Ashley Verhulp and Willem de Villiers to attain her PrEng. 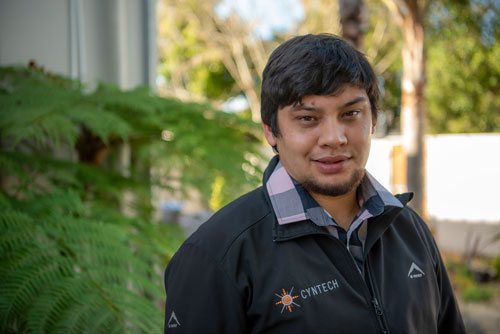 Tashriq began his career with Cyntech in February 2019 after completing his MEng in Electrical & Electronic Engineering at Stellenbosch University in 2018. His MEng project focused on solar renewable energy, where he designed and experimented with solar panel monitoring techniques to optimise energy efficiency of the solar panel. Tashriq has a passion for solar energy systems and plans extend this passion to the team.

During his studies at Stellenbosch University, Tashriq worked part-time in their IT department, where he acquired excellent programming skills in various programming languages. He will extend his programming capabilities by assisting Cyntech in designing process control networks and SCADA systems.

Tashriq is registered with ECSA as a Candidate Engineer and is being mentored by Cyntech Chairman Ashley Verhulp to attain his PrEng soon. 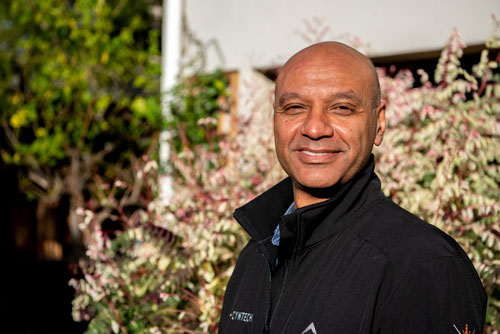 Ezra has a background of over 20 years’ in draughting electrical services. Ezra permanently joined the Cyntech team in November 2018 after displaying untapped potential during his part-time employment period at the company which commenced in October 2017.

He is skilled in lighting, small power, telephone and data installations, as well as fire detection, CCTV and access control. He is also experienced in the draughting of Piping and Instrumentation Diagrams (P&IDs) and Hazardous Area Classification Drawings.

Ezra is continuously looking to upskill himself and is always willing to assist with the basic design of lighting and small power layouts, fire detection and CCTV layouts where required. 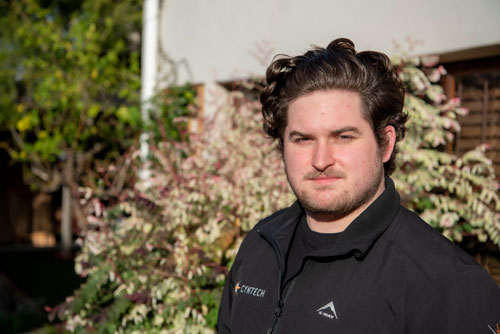 Joshua began his career as an electrical apprentice in 2015 and was an active member of an electrical team conducting installations in hazardous areas throughout Sub-Saharan Africa. Over the course of 18 months, he gained experience in MCC and control systems, equipping him with invaluable practical experience, now used in the consulting discipline at Cyntech.

Joshua began his employment with Cyntech in 2019. He is proficient with AutoCAD and designs electrical networks for the petrochemical industry. Joshua’s diverse set of competencies also extend to lighting design. He is passionate about HMI and SCADA systems and aims to specialise in System Integration. Joshua is very dedicated to his work and has a strong work ethic. He is being mentored by Director Willem De Villiers and Chairman Ashley Verhulp.

Take the first step towards the ideal engineering solution specifically tailored and made for you.